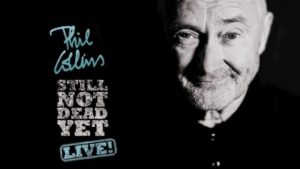 The English music legend walked onto to the stage slowly with the assistance of a cane. He stopped, waved and slowly walked over to a swivel chair that was placed in the middle of the stage and sat down. He informed the audience he would be sitting most of the show, “back surgery, foot’s fucked, but that’s not going to stop us from having some fun, is it?” As the piano in the beginning of “Against All Odds (Take A Look At Me Now)” echoed across the arena, there was a roar of excitement and applause.

His position on stage did not affect his performance in the least. Unlike his physical state, his voice has hardly been affected by time.

The mixed set list brought something for everybody with a mixture of love ballads and more upbeat songs.

Some Genesis favorites were also included, such as “Throwing It All Away”, “Follow you Follow me” and “Invisible Touch”.

His guitarists, backup singers, brass musicians and drummers were an excellent foundation of helping him deliver a seamless performance. He took the time to introduce each one of them, telling some of their background and giving them great compliments.

The highlight was the powerful performance of “You Know What I Mean” with his 18 year old son, Nicholas, who also is drumming for his dad on the tour, by his side at the piano. The audience laughed as Collins explained it was the only song from all of his albums that Nicholas could find that he liked.

The chilling “In The Air Tonight”, complete with the famous drum fill, brought the entire arena to their feet, including Collins.

The last five songs ignited the arena. “Sussudio” closed the show with streamers and confetti raining down from above. There was an encore of “Take Me Home” with an arena-sized singalong.

Phil definitely showed Louisville that he is “Not Dead Yet.”

Against all odds, he pulled it off.

Against All Odds (Take A Look At Me Now)

Another Day in Paradise

Throwing It All Away (Genesis song)

Who Said I Would

Something Happened on the Way to Heaven

You Know What I Mean

In the Air Tonight

Dance Into the Light